Back in May I attended my local CUGC where Ron Oglesby presented a master class on Citrix App Layering (ELM) and after the presentation, it was asked if there was any sort an SDK. Ron explained that there is no public API or SDK (yet), but some of the newer ELM components were built with this in mind. This statement resonated with me and when I got home that afternoon, I fired up Fiddler to see how the API worked. After a rather lengthy process of reverse engineering the API with Fiddler, Postman and documenting the processes I was able to write my SDK. When I completed the SDK I wasn’t really sure how it could be utilized in an environment or if there would be a need. Figured it would be more useful around documenting an ELM environment vs actually automating the creation or updating layers. I was under the impression that if an organization could automate layer creation, chances are they could automate the entire image making ELM redundant. However, after thinking about it for some time I now see ELM in combination with automation potentially being the stopgap between manual installs\updates and a fully automated build. By automating certain aspects of ELM it could allow organizations to tiptoe into automation and create a comfort level and free up time otherwise spent on updating common layers. This allows administrators to continue manually installing the difficult applications or even controlled by other teams but allowing automation to keep the common apps (e.g. Firefox, Chrome, Notepad Plus Plus…) and OS layers fully updated on regular intervals.

The intent of this series of posts is how to approach automating some common apps and keeping the operating system layers fully updated.

Just some notes before getting started.

To get started you’ll need the following configured and ready to go.

Starting off, we will go over the configuration of the OS layer and script host to allow the scripts to successfully run. 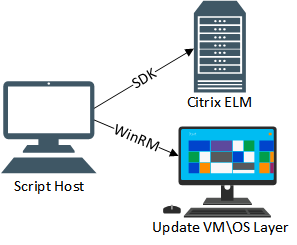 The script host communicates with the ELM update VMs via WinRM. In order for this communication to take place, the script host needs to be allowed to access the update VM. The * allows access to any IP. This post does not go into restricting access further but there are plenty of guides outlining this.

Let’s install both my ELM SDK and VMware PowerCLI

An operating system layer needs to be created and configured to allow the script host to communicate for both the app layers and operating system updates. Again, I use Windows 10 for this process but I’m assuming Windows 2016 will also work. The following steps can be used either on a new layer or new version.

Open up a PowerShell window as admin.

Chocolatey is a command line based package manager that can either use a public or custom repository of numerous applications. Chances are if you have a publicly downloaded app a Choclately package exists. We will install Chocolately with the following command.

The following modules need to be installed that assist in the update process. PSWIndowsUpdate handles installing Windows updates from Powershell and Autologon can enable the interactive auto login process after reboots that will be used for the update and install processes. Install both using the following commands.

Validate your admin credentials work. USE THE LOCAL ADMIN ACCOUNT.

If the following commands run successfully, go ahead seal and finalize the layer

You are now ready to start automating!

In this section, we will cover fully automating the app layer creation and update process using some common Chocolatey packages. The script works in the following way

Let’s get started by opening up the BuildAppLayer.ps1 file in ISE or Code (run as admin) and make changes to reflect your environment. Additional Choclatey packages can be found here.

For this example, we will be installing Notepad Plus Plus, Firefox, and Chrome

When ready go ahead and run the script. You should start to see the activity within vCenter and process kick off. Grab a cup of coffee and wait for the layers to create! Once completed they can be added to an image. MAKE SURE TO TEST!!

In this section, we will cover a method to apply any recent Windows updates to a new OS version.  Since Windows Update is restricted from running in a remote PowerShell session it requires any scripts to be run locally from the VM.  To circumvent this restriction the script creates a scheduled task that launches on boot to check for an apply the updates.  It does the following.

Note: The way this process is currently configured it can cause reboot loops on the update VM.  If the update VM doesn’t shutdown in 2 hours the script terminates.

Let’s get started by opening up the BuildOSRev.ps1 and UpdateTask.ps1 files in ISE or Code (run as admin) and make changes to reflect your environment.  Make sure to edit BOTH files.

Once your ready go ahead and run BuildOSRev.ps1 If everything works correctly you should see the running process in ELM and the script will continue to check status.